Dental products have come a long way through the years? 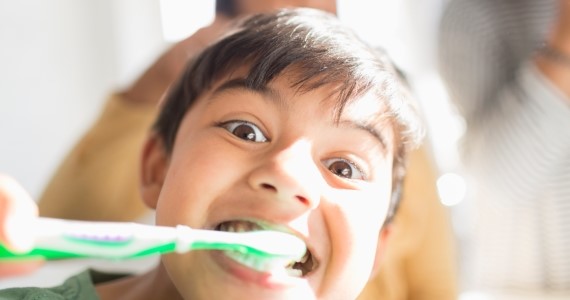 In 4000 B.C., the first people to use a toothbrush were the Hindus of India who used the end of a fresh twig, which was frayed into fibers. The Babylonians in 3500 B.C. called their toothbrush a "chewing stick."

A toothbrush made of hog bristles was used in China in 1600. In 1780, William Addis of England invented a brush used to clean teeth. The handle was made from cattle bone and the bristles were from swine.

The first toothbrush, as we know it today, was invented in 1857 by an American named H.N. Wadsworth followed by a patented three-row toothbrush of serrated bristles with larger tufts created by Dr. Meyer Rhein. The next phase of toothbrushes replaced swine bristles with synthetic bristles. It wasn't until 1938 that nylon bristled brushes with plastic handles were invented. The nylon bristles were less abrasive to the teeth and gums. The electric toothbrush was first produced in the United States in 1960.

Daily tooth brushing habits were not talked about as a public health issue until the end of World War II.

Dental toothpaste has been used since 500 B.C. in China and India. In 1824, a dentist named Dr. Peabody actually added soap to toothpaste. Many compounds were added to toothpaste, like chalk and flavors, during the 1850s. In 1892, Dr. Washington Sheffield created the collapsible tube dispenser. After World War II, other agents were used - ultimately resulting in the addition of fluoride.

Dental floss-like substances have been found in the teeth of early pre-humans and American Indians. Dental floss made from a thin thread of silk was invented in 1815 by a New Orleans dentist named Levi Spear Parmly. Floss was not manufactured using unwaxed silk floss until 1882. In 1896, Johnson & Johnson Company released dental floss made from silk surgical sutures. After World War II, a medical doctor named Dr. Charles Bass thought that nylon had advantages over silk floss. Nylon had a greater resistance, could be produced in larger quantities and could have consistent diameters. Dental floss remains a critical component for good oral health today.

There are several ancient theories about the cause of tooth decay. Queen Elizabeth I was known to have discolored teeth. Paul Henter, a German traveler, believed that the excessive consumption of sugar may have discolored her teeth. Before 1960, Americans believed that a tooth worm, which either had appeared spontaneously or had bored its way into the tooth, caused the stabbing pain of a toothache. If the tooth pain was severe, it meant that the worm was thrashing around.

But if the aching stopped, then the worm was at rest. Cultures all over the world held on to the notion of the tooth worm, even though many of the cultures had no contact with each other. The folklore of the tooth worm persisted from ancient times to the beginning of the 18th century. It wasn't until 1960 that Dr. Paul Keyes discovered that tooth decay was actually caused primarily by bacteria known as Streptococcus Mutans.

The Toothy Truth About George Washington

The father of our country, George Washington, suffered from poor dental health. He wore wooden dentures because he had most of his teeth extracted. He suffered from toothaches all his adult life, and it is believed that his quick temper may have been the result of this dental pain.

By the time Washington became president of the United States in 1790, he only had one tooth, his lower left bicuspid. When his dentures were made, this tooth was made to show through a hole in his lower denture. When President Washington sat for his inaugural painting, the artist, Gilbert Stuart, thought that his dentures were too short, making his cheeks and lips look sunken. He padded Washington's mouth with cotton attempting to restore the natural lines of his face. This technique did not work; instead he looked puffy in his portrait.

While these fun facts will give you something to smile about, we know that oral health is more than just fun and games. We know more today about taking good care of our teeth and gums. Practicing good dental health habits can foster a healthy smile for a lifetime.